Posted by lgirard on April 24th 2006 to Center News

The Arvada Center for the Arts and Humanities announces its upcoming theater season, including two regional premieres, three musicals and one classic. Selected productions for the 2006/2007 season reflect the creative integrity that you have grown to expect. The Arvada Center honors its commitment to producing quality and engaging entertainment at an affordable price.

This year’s subscription campaign includes several new packages responding to patrons who want a full evening of entertainment, an insiderâ€™s view or greater flexibility. Details on subscription packages follow the 2006/2007 season schedule below.

IRONIC COMEDY ON DEFINING SUCCESS
Souvenir centers on the musical career of Florence Foster Jenkins, a wealthy society eccentric with a striking lack of talent. With delusional perseverance, she teamed up with mediocre pianist Cosme McMoon hoping for success in the music world. Despite questionable musical aptitude, they became all the rage. Their bizarre musical partnership earned them extraordinary cultish fame and their awkward pairing evolved into a friendship as full of light and warmth as the spotlight they shared.

A FAMILY DRAMA OF FORGIVENESS & RENEWAL OF FAITH
This amusing family story is set in Buffalo, NY during the most idealized period, the Eisenhower years of the late 1950s. The Pazinski family is unremarkableâ€”there’s Mom, Dad and their four children, Eddie, Annie, Georgie and Rudy. Rudy, on the other hand, is quite remarkable: a precocious 12-year-old who pushes all the wrong buttons, questioning family values and the Roman Catholic Church. He believes God put us on earth to “have fun,” and he’s trying to figure out why his family isn’t having any.

WINNER OF 6 TONYÂ® AWARDS!
Set in New York City in 1922, Thoroughly Modern Millie tells the story of young Millie Dillmount, who has just moved to the City in search of a new life. It’s a New York full of intrigue and jazzâ€”a time when women were entering the workforce and the rules of love and social behavior were changing forever. Based on the popular movie, the 2002 stage version includes a full score of new songs and snappy dance numbers. Filled with frisky flappers, dashing leading men and a dragon-lady villainess that audiences will love to hate. This winner of six Tony AwardsÂ®, including Best Musical, is perfect holiday entertainment for the entire family.

A CLASSIC DRAMA THAT STILL PLAYS TRUE
The action in this engrossing drama is deceptively simple, while the feelings are complex. A son who went away to war as a pampered boy comes back as his own man, and the varying effects on his mother and father are devastating. They want to love each other, to relive the good old times and build some better ones together, but they have grown irrevocably apart, and can no longer reconcile their dreams with reality. This Pulitzer Prize-winning play demonstrates how family relationships and situations transcend time and replay themselves over and over again.

LIFE’S MELODY IS BITTERSWEET
Leona, an unmarried American secretary “of a certain age,” goes on a vacation to Venice where, under the spell of that enchanted city, she falls in love. The gentleman is an attractive, middle-aged shopkeeper, whose attentions give flight to her deepest dreams of romance. All too soon, Leona’s hopes are dashed. Might it have been better never to have loved at all? A tender musical and bittersweet testament to the complexities of the heart.

MUSICAL MAYHEM TEXAS STYLE
This happy-go-lucky view of small town vice and statewide political side-stepping recounts the good times and the demise of the Chicken Ranch. For more than 100 years it’s been one of the better pleasure palaces in all of Texas. Governors, senators, mayors and even victorious college football teams have frequented Miss Mona’s cozy bordello until that puritan nemesis, Watchdog, focuses his television cameras and his righteous indignation on the institution. The southern bawdry humor can’t hide that these sinners have hearts of pure gold.

Posted by lgirard on April 24th 2006 to Uncategorized

As promised, here are a few photos of the current state of the Arvada Center expansion. Even though we had a minor setback when we had to reschedule the opening of Pippin, the construction appears to be right on track. As you can see in the following photo, we now have a big hole in our back yard. 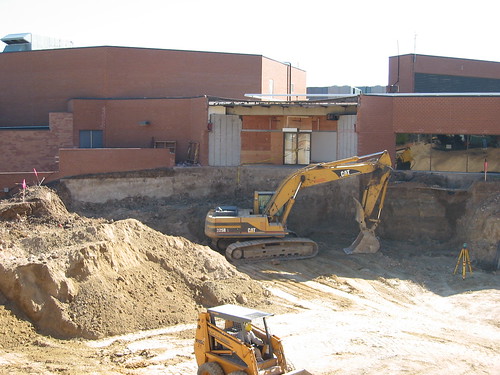 See more photos of the Arvada Center Expansion Project in our photo gallery.

Arvada Center looks to the past

John said, “The money title is the first area staging of “Thoroughly Modern Millie,” the 2002 Broadway hit adaptation of the Julie Andrews movie about a flapper making it on her own in Roaring ’20s New York. The other musicals are just as familiar: “The Best Little Whorehouse in Texas” (1978) and “Do I Hear a Waltz?” (1965) by Stephen Sondheim and Richard Rodgers.”

Read the rest of the Denver Post article at https://www.denverpost.com/entertainment/ci_3732670

Lisa wrote, “On Thursday, Jessica Lee Goldyn opens in the chorus line of Pippin. Days after the show closes, she joins A Chorus Line – the hotly awaited Broadway revival.

It’s a big move for a 20-year-old, cast in the ensemble of the Arvada Center’s production of the Stephen Schwartz musical. She’ll be one of the many in Arvada, the company backing up a fanciful tale of the son of Charlemagne.

And until this winter, Arvada would have been a major move forward in her career. The New Jersey native just got her Actor’s Equity union card last fall. Then came A Chorus Line, in which Goldyn won the role of Val at an open- call audition in February.”

See the photo gallery for photos of Jessica Lee Goldyn and the rest of the Pippin cast.

John says, “The colorful characters and plot may be well-worn – the original ran for 1,944 performances and won five Tony awards – but Arvada Center artistic director Rod Lansberry thinks audiences will reconnect to the themes of looking for an ultimate meaning, even if the show offers no easy answers … Pippin’s 20-person ensemble cast was open to the challenge of interpreting the stage classic, which Lansberry said made all the difference in the dance-heavy production. But balancing the strengths of the Bob Fosse-directed original with cast-led innovations was tricky.”

Visit the photo gallery for photos of Pippin.