Getting to Know: Carlou D

With a powerful voice that goes from low and gravelly like Leonard Cohen to an attention-grabbing falsetto, Senegalese crooner Carlou D is a multifaceted talent that appeals to a wide audience. Armed with an acoustic guitar and a sound that pulls from jazz and blues, Carlou D brings his joyous sound to the Arvada Center Outdoor Amphitheatre stage.

Keep reading to learn a little more about this powerful artist, before his concert at the Center on August 20.

7:30 pm in the Outdoor Amphitheatre

Carlou D’s musical career began in the pioneering Senegalese hip-hop group Positive Black Soul (PBS), where they used the power of catchy music to get across messages of political and social unrest. While his music has more of a spiritually-influenced pop sound now that has brought him into the international limelight, Carlou D says “the part of hip-hop which I have kept in my music is the courage to be direct.” 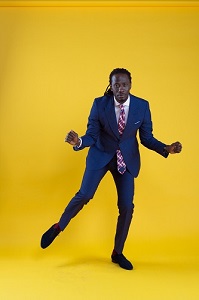 His style is called “muzikr” which combines the word “music” with “zhikr,” an Arabic and Wolof word meaning “spirituality.” Carlou D is a Baye Fall Sufi, a mystic Senegalese Islamic brotherhood that is highly influential in both spirituality and fashion. The Baye Fall stand out in their colorful patchwork garments, long, dreadlocked hair and thick, black amulets (marabouts) around their necks.

Following his time in Positive Black Soul, Carlou D decided to challenge himself and work on his vocals. He became an actor in the first African opera L’Opera du Sahel, where he unlearned the vocal techniques of hip-hop and worked with vocal coach and great Senegalese singer Wasis Diop to “find his baritone.”

His concerts have a knack for bringing everyone together. Even though his songs are sung in English, French and Wolof (sometimes all in the same song!) his anthemic melodies find the audience singing along together by the end.

The Arvada Center is thrilled to present this concert along with the African Leadership Group!

African Leadership Group (ALG) is an established, 16-year-old Colorado nonprofit created to serve and improve the quality of life of the African immigrant community. They do this through social, education and economic programs such as youth empowerment and public speaking classes reaching thousands of individuals. Every year during the month of August, they celebrate loudly and proudly the impact African immigrants have in the state of Colorado.