Posted by lgirard on March 23rd 2006 to Center News,Lobby Talk

Patrons arriving late create a customer service dilemma. Late arriving patrons expect to be seated immediately. The patrons who arrived on-time are disrupted by late arrivals being seated around them. Out of respect for those who arrive on-time and for the performers onstage, we must strictly enforce the following policy: patrons arriving late may not be seated immediately and may not be seated in their assigned seats. Late arrivals will not be seated until there is a break in the action onstage. Depending upon the length of the break, they will be seated in either the most conveniently available seat or their assigned seat. At intermission patrons may move to their assigned seats. Please arrive on-time, and if for some reason you arrive late, please understand our need to enforce this policy.

Posted by lgirard on March 14th 2006 to Behind the Scenes

How many of you get to go to work and set things on fire or shoot off fireworks indoors? Well, that is exactly what the Arvada Center stage crew got to do yesterday. They wanted to add some flash (pun intended) to the set for the upcoming play Pippin. So, they consulted Rocky Mountain Pyrotechnics Guild (RMPG) to teach them the art of theatrical pyrotechnics. RMPG instructors Micki McDanal and Byron Nelson came out to the Center and lead an all-day class teaching the Arvada Center crew all the finer details of safe practices necessary for protecting crew, cast and audience while enhancing performing arts with proximate fireworks on the theater stage. 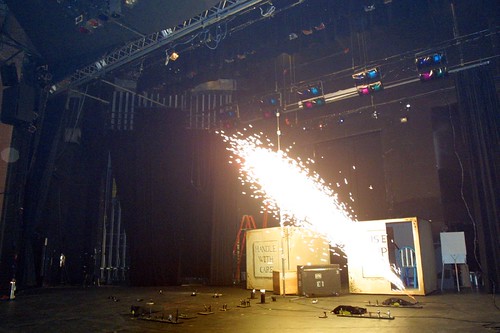 See the rest of the photos from the class or see all photos related to Pippin: Behind the Scenes.

Creating the costumes for Pippin

Posted by lgirard on March 10th 2006 to Behind the Scenes

Every once in a while, we take the time to share with you insight on what it really takes to create a production at the Arvada Center. Now that we have a blog, we have the opportunity to share things like this with your more often.

Over the next month or so, we will be posting several entries and photos on the making of Pippin. This production will feature a completely new set and costumes all of which are custom created right here at the Arvada Center. Stay tuned, we think you will find this very interesting. 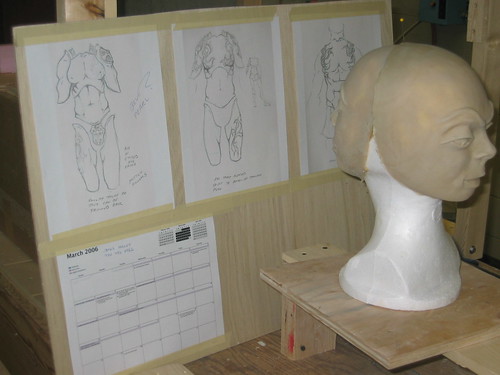 This week we will be visiting James as he designs and creates a series of latex masks that will be used in one of the scenes of Pippin.

See the complete photo slideshow of these masks and armor.

Chase â€“ giving back in Colorado

The July 2004 merger of JP Morgan Chase and Bank One Corporation created one of the biggestâ€”and best financial services companies in the world that is also one of the most committed to the public good. Chaseâ€™s partnership with the Arvada Centerâ€™s recent sponsorship of The Full Monty is but one recent example of Chaseâ€™s investment in our community by helping to bring award-winning theater to the Rocky Mountain region. Providing quality service is Chaseâ€™s primary goal. While it continues to be the local bank that has served Colorado since 1874, Chase now can provide customers with a wider array of products and services than ever before.

Chase customers in Colorado have access to locations in 25 citiesâ€”including more than 70 banking centers and 100 ATMsâ€”plus 24-hour-a-day online and telephone banking. Chase works to make its services more convenient and accessible, while also introducing new and improved products that provide solutions to customersâ€™ needs. More than ever, Chase delivers maximumstrength banking. Chase believes in investing in local communities; not only is it the right thing to do, it makes good business sense: Businesses do better when the communities they serve are vibrant and healthy. Thatâ€™s why, in 2005, the investment company Chase gave more than $900,000 to Colorado charities and provided more than $35 million in Colorado community development loans and investments.

The companyâ€™s giving is strategically focused on community economic development, youth education, and arts and culture. Chase works in partnership with not-for-profit organizations to create vital, selfsustaining communities, and its primary partnerships are designed to serve the needs of low- and moderate-income individuals and communities. In addition to grants, investments, and loans, Chase provides its expertise and human capital to help revitalize neighborhoods, build affordable housing, expand access to capital, and develop financial literacy skills. Chase also is committed to improving the quality of life in our communities, which is why it supports arts and cultural institutions. Here in Colorado, Chase is proud to make its financial resources and 1,300 employees available to enhance the quality of life in all of the communities it serves.

Posted by lgirard on March 01st 2006 to Behind the Scenes

What does a former star of the hit television show 7th Heaven, a Sony Classical recording artist, a Broadway dancer, and an award-winning potter have in common? They have all studied at the Arvada Center. Over the years, the Arvada Center has had the opportunity to train these and many other talented students who have gone on to find fame in the performing and visual arts.

Taylor Caruso Kirk is one of the Centerâ€™s newest stars. At just 16 years old, she was offered a Sony Classical recording contract and has been a guest soloist, singing the national anthem at Bronco and Rockies games and other local events, and recently was a soloist with the National Repertory Orchestra. For the past several years, Taylor has trained with Arvada Center voice instructor, Judith DeRosa, who is a nationally known opera singer. Earlier in her career, Taylor also trained with another Arvada Center instructor, Su Coffey Berg, and was a student in the Centerâ€™s Musical Theater dance program.

Perhaps the most famous student of the Arvada Center is Jessica Biel, the former star of the hit television show, 7th Heaven. Jessica was Beauty in the Centerâ€™s 1993 Junior Drama Camp production of Beauty and the Beast. She has since gone on to star in several major motion pictures.

The Arvada Centerâ€™s dance program has a long history as a stepping-stone for many young dancers. Former students include Denny Paschall who is currently dancing on Broadway in Chicago, Nick Seligson-Ross who is the artistic director and choreographer for the Nicholas Andre Dance Theater based in New York, and Zina Mercil who has performed in Cats in Chicago and at the Boulder Dinner Theater and in several other local productions. She is currently dancing for Lâ€™Oreal in their national touring campaign. Several of the Centerâ€™s dance teachers, some of whom are also former students, dance professionally as well. Jennifer Aiken (principal) and Kathryn Wagner (soloist) are both members of Boulder Ballet and Marlana Dampier is with Ballet Nouveau Colorado. Several Arvada Center dance students have also received dance scholarships to major dance universities including University of Kansas, University of Utah, and Purchase College in New York.

Ceramic artist David Warren began his career in ceramics when he enrolled in a clay handbuilding class taught by Arvada Center Ceramicâ€™s Coordinator, Bebe Alexander. He loved the class so much that he eventually closed his graphic design business in Denver and moved to Taos to open a ceramics studio with his wife who is also an artist. His ceramic work explores the sculptural possibilities of bowls, teapots, pitchers and vases, finding a place in many art collections and ceramic publications.

The Centerâ€™s ceramic department is also fortunate to have many talented students return as instructors. Megan Ratchford, who is currently the Centerâ€™s artist-in-residence, began taking ceramics classes at the Arvada Center in 1992, eventually becoming a studio assistant and instructor. Megan recently completed her BFA in ceramics at the University of Nebraska Lincoln. Connie Christensen began at the Arvada Center as a student in 1990 and became a studio assistant the same year. She has been an instructor at the Arvada Center since 1997. Connie shows her work nationally and has received numerous awards for her functional ceramic pieces. Her work has been included in many publications, including 500 Bowls and 500 Teapots, both by Lark Books. Connie has a studio at the Arvada Ceramics Guild in Olde Town Arvada.

It is never too late to discover your own artistic talents. The Arvada Center offers classes in the performing arts, visual arts, and humanities in four sessions throughout the year. To request a copy of our latest class catalog, call 720-898-7200.