A dozen Denver-area fashion designers created, cut and stitched in the Fashion Project at Tamarac Square, a month of challenges akin to those in Bravo’s hit show “Project Runway.” The designers made everything from little black dresses to outfits assembled only from items they bought at Ace Hardware. Last week, Armando Thomas Guerra, 28, emerged the winner. The Arvada native won a trip to New York Fashion Week in September and tickets to the designer show of his choice. The judges said they were consistently blown away by Guerra’s “strong vision.” Not bad for someone says he was a piano-playing “super nerd” in high school. He has spent the past several years at the Arvada Center, sewing costumes and maintaining wigs.

Armando also worked on the building of Do I Hear a Waltz? during the competition. Read the rest of the article Fashion designer cut out for the job on the Denver Post website.

Posted by lgirard on April 30th 2007 to Center News,In the News

Do I Hear a Waltz? Featured on FOX 31 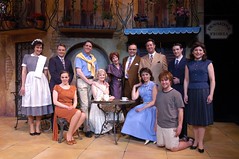 Waltz was featured on FOX 31. Bill Husted included it in his “Hot Weekend Entertainment Picks”. On the site there is picture of the interview and below the picture is a “Side Bar – Related Items Video LINK. Click that to view the piece. 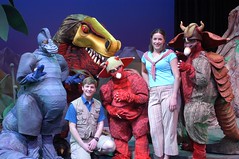 Denver Post Theater Critic John Moore recently reviewed the Arvada Center’s “The Dinosaur Play.” He had some great things to say about the children’s theater program …

“The Arvada Center remains the area’s premier children’s theater because it always employs its same considerable resources on its daytime shows for tykes as for its award-winning regional theater for adults.

With its impressive sets, lighting, sound, costumes and special effects, the Arvada Center’s kids slate is better endowed than most of the state’s nearly 100 ‘adult’ theater companies. Most impressive is that it consistently gathers acting ensembles that can hold their own with anyone on any stage.”

“Their adventures include a sandstorm and a volcano, while finding clever ways of involving more than 500 kids in the process – like when they help ‘pull’ a stuck dino out of a swamp. I don’t think the kiddies learn much along the way about prehistory, but the Arvada Center wisely provides an impressive study guide that will stimulate their learning for weeks.”