Well we did it, a complete story about how the Arvada Center puts up a show. This four part story begins with the Auditions and continues through all facets of producing a show – from costumes and set building to rehearsals and opening night. ENJOY..!!!
PART 1 â€“ AUDITIONS
PART 2 â€“ COSTUMES & SETS
PART 3 â€“ REHEARSALS
PART 4 â€“ OPENING NIGHT

Not the Same Old Song and Dance

Posted by lgirard on December 07th 2007 to Center News 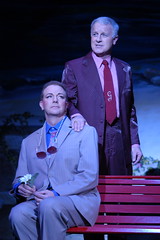 I can’t decide whether it’s wonderful or tragic that 20 years after its Broadway debut, La Cage aux Folles still packs an emotional punch.

Certainly it presents a narrow view of homosexuality, confining it to a drag club on the Riviera filled with preening men approximating a cartoon of femininity. It’s got a Boys in the Band whiff of the stale, but like that play, the musical today reminds us of how glacial progress can be.Â  READ LISA’S WHOLE REVIEW <<CLICK HERE>>

Posted by lgirard on December 05th 2007 to Center News

…or should we say no one is as good as Gold.

Our Georges in the fabulous production of La Cage aux Folles running through December 23, was interviewed by John Moore from the Denver Post and it ran in today’s paper. 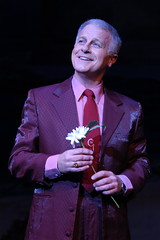 The Regis High School grad played four roles in the 1997 Broadway revival of “Annie.” He left the acting profession to run his own business, but he’s back now at the Arvada Center, where he first played Judas in “Godspell” in 1981.

He’s now playing Georges, the emcee at a transvestite club whose son announces he will marry the daughter of France’s most conservative politician, who doesn’t realize his future son-in-law’s parents are two gay men.