Posted by lgirard on December 23rd 2009 to Center News,In the News,Press Room

Mark Collins with the Daily Camera announced over the weekend (12/19/09) the 2009 Camera’s Eye Theater Awards.

Other Category Winners and Runners Up include:

See all the winner and honorable mentions here…

Well it is that time of year again. The Denver Post Ovation Award nominees have been announced and it is an interesting group indeed. More than 37 different theatre companies were represented with this yearâ€™s nominations. It just goes to show that there is strong work being done in theatre companies across the state. December 14, 2009 – Denver Theater Examiner – Deb Flomberg

…and the Arvada Center is honored to again lead this years Ovation Awards with 16 nominations:

Michael Bouchard
Diana Dresser
C. Kelly Leo
David Villella
EJ Zimmerman
Misha Johnson
Daniel Herron
Jeffrey Roark
Ellie Schwartz
Seth Caikoski
Amanda Earls
Take a look at the full list of nominations HERE.
Be sure to check out the Readerâ€™s Choice ballot HERE. You can write in your choice for every category or vote for one of the nominees that were already listed.

Posted by lgirard on December 03rd 2009 to Center News,In the News,Press Room 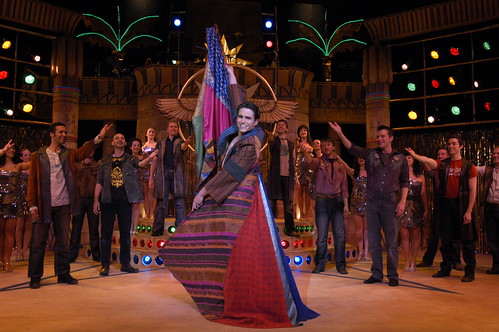 Ladies and gentlemen, direct from Caesar’s Palace via the Grizzly Rose, this is “Jooooooooseph and the Amazing Technicolor Dreamcoat!”

Taking cues from Vegas, “American Idol,” “Top Chef,” the Middle East and the Wild West, the Arvada Center is bringing back go-go-go Joe like you’ve never seen him before…

The sets are spectacular, the dances dizzying, the voices mellifluous and the abundant skin supple. The sets smoke, and the cast is smoking. There’s serious wattage on display here â€” and the lights are pretty, too.

The costumes â€” 416 handmade pieces in all â€” are incredibly detailed. The brothers are dressed in designer jeans and Rockmount-like Western shirts covered by sheepskin leather vests. The backs are adorned with the exact insignia of the tribe each biblical brother went on to create, along with his name inscribed in Hebrew.