July Events at the Arvada Center

Posted by lgirard on June 26th 2013 to Center News

Meet and Greet the Curtains’ Cast

Posted by lgirard on June 19th 2013 to Center News

Our last show of the season is finally here, and itâ€™s going to be a great one! The Curtainsâ€™ cast began rehearsals yesterday, and kicked it off with an Arvada Center tradition, the first rehearsal Meet and Greet. Employees from different divisions of the Arvada Center joined the Curtainsâ€™ cast and crew for some delicious breakfast burritos provided by the Performing Arts Committee, and the opportunity to get to know one another.

For veteran members of the cast returning to the Arvada Center, it was a time to catch up with old friends, while the new actors and actresses to the Arvada Center were welcomed in with open arms. Chit-chat, laughter and lots of food were present in the room. It was a great way to begin the show that will close our 2012-2013 season.

Check out this neat tweet from cast member Johnny Stewart 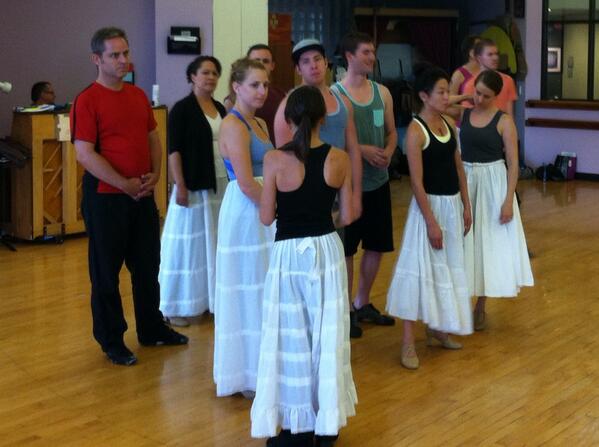 After meeting one another, everyone settled into their seats as Director Gavin Mayer said his welcome speech. The excitement from the cast was apparent as they introduced themselves to the entire room. The Curtainsâ€™ cast is filled with enthusiastic, upbeat actors and actresses and an outstanding crew, which will make Curtains one amazing show.

The whodunit musical comedy Curtains features a dazzling musical score by the legendary team, Kander and Ebb ( Chicago, Cabaret ) and was nominated for eight Tony Awards, including Best Musical, Best Book, and Best Original Score. The chief sleuth, Lieutenant Frank Cioffi, with a secret affinity for musical theater, investigates the murder of a Broadway-bound theater company’s tremendously untalented star on opening night. Could the culprit be the hard-edged lady producer, one of the recently divorced songwriting team, the egomaniacal British director, or the seemingly sweet ingÃ©nue? Curtains will have you on the edge of your seat – laughing!

Curtains will open July 9 and will run through July 28. Don’t miss it!

Posted by lgirard on June 12th 2013 to Center News

Time to explore your creative side! In this two day workshop, learn from Russell Wrankle, as he shares his techniques for creating animal sculptures that express a personal narrative.

Students will explore the process of finding the bone and muscle structures beneath the skin to create gesture and tension.

Wrankle will also focus on two of the most difficult and intimidating elements of the figure, eyes and teeth, to create the illusion of life and emotion. Students will return to their home studio with a deeper understanding of form and new techniques to help them achieve their artistic expression.

Clay is available for purchase at $10/25lb. Bring a sack lunch or eat out.

June Events At The Arvada Center

Posted by lgirard on June 05th 2013 to Center News